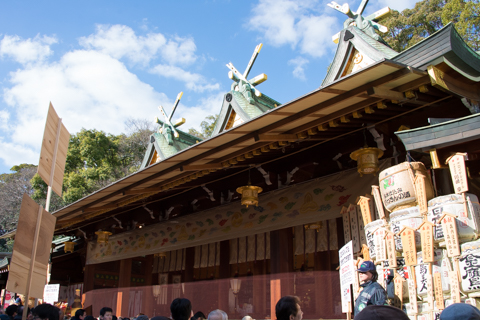 Familiarly called Ebessan for the god of wealth, this shrine is in charge of all the Ebisu Shrines around Japan worshipping Ebisu. The most famous festival “Toka (Jan 10th)-Ebisu” is held every year from January 9th to 11th. Over 1 million people visit the Nishinomiya Shrine to ask for prosperity in commerce during this 3-day festival.

At first, a big tuna fish is offered to the diety on 8th the day before the festival. The 9th day is Yoi-ebisu, “Arima Onsen Kento-shiki” is held in front of the main shrine. A group of geisha girls in traditional bathhouse costumes churn the hot spring water until the water becomes the right temperature in step with the beat of the drum. This is an annual event to show appreciation the god of wealth.
The 10th day is Hon-ebisu, all gates of the shrine are closed, the festival starts at 4:00 am. When the gates open at 6:00 am, a large number of people waiting in front of the gate rush into the precincts, running toward the honden. This is the ritual called kaimon-shinji-fukuotoko-erabi, and the man who reached at the honden first is chosen as the fukuotoko (the lucky man) of the year. The 11th day is Nokori-fuku. This traditional ritual has been maintained since the Edo period and is one of the famous rituals in Japan. 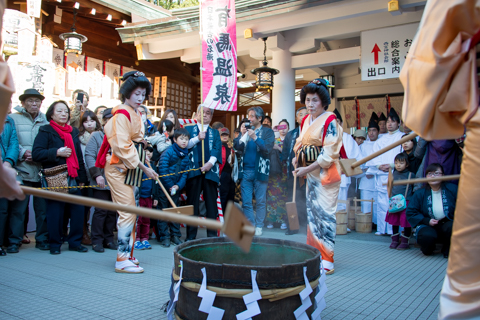 This shrine is particularly noted from ancient times with its association with Nada-gogo, an area famous for superiorly brewed Japanese sake and with a recording approximately 800 years ago of an offering to the shrine by former emperor Takakura. Especially from Muromachi Period (14th to 16th century), the Ebisu God became the representative of god of prosperity, and Nishinomiya Shrine became the means for spreading the entertainment arts such as puppet show, Noh songs, and Noh parodies throughout Japan. The large front gate, popularly called red gate for its vivid red color, is said to be a donation from Toyotomi Hideyori, the son of Hideyoshi. It has been designated an important cultural asset as one of the grand constructions performed during the Momoyama Period (1568-1600).